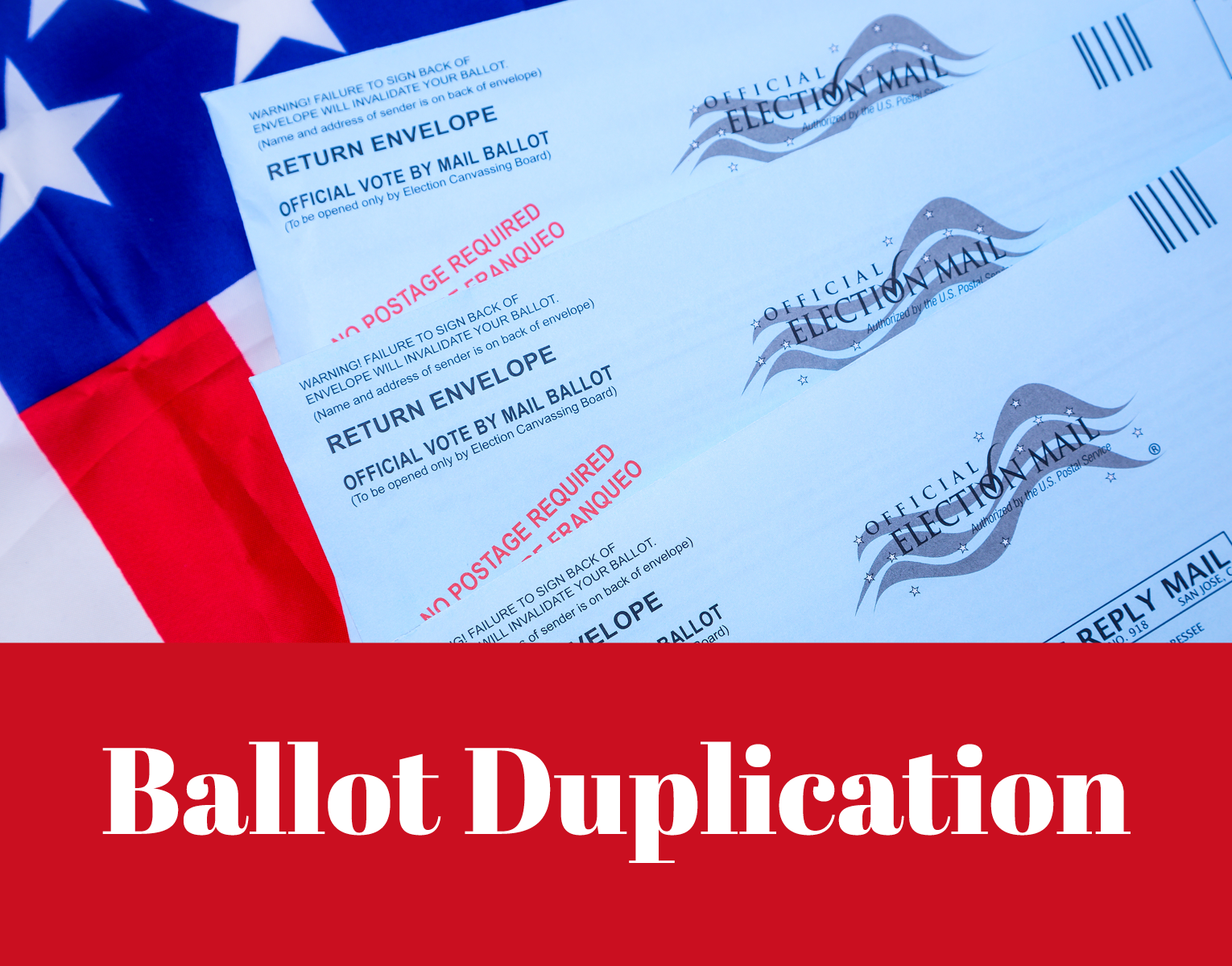 In the spring of 2020, the members of the Sustainability of UOCAVA Balloting Solutions Subgroup(SUBSS) of The Council of State Governments Overseas Voting Initiative (OVI) developed  recommendations for duplication of damaged and/or machine unreadable ballots. Our Working Group of state and local election officials wanted to aid other election officials and inform the greater election stakeholder community as contingency planning for the 2020 election began to unfold. These enhanced, pandemic-era recommendations built upon the previous work of the OVI on ballot duplication.

After assessing the 2020 election cycle in relation to lessons learned regarding ballot duplication and other post-election processes, including how they were discussed in both social and mainstream media, the OVI SUBSS Working Group members developed the following recommendations:

If you have any ballot duplication questions or suggestions for additional recommendations based on your experience, please reach out to us at elections@csg.org. We’d love to hear from you!

The Council of State Governments (CSG) Overseas Voting Initiative (OVI) has been examining the November 3, 2020 election in relation to all things “ballot duplication” and sharing insights in our latest article series. We recently highlighted ballot duplication in the news followed by a look at poll watchers, observers and the ballot duplication process. In this third series installment, we’re providing an overview on the rollout of new ballot duplication technology by the office of the Orange County, California Registrar of Voters (ROV)  following their research efforts to advance this process in one of the largest U.S. voting jurisdictions.

For several years, Orange County ROV Neal Kelley and his team researched technology-aided solutions to help streamline the process for duplicating ballots marked outside of a polling place that may have become damaged or are otherwise unable to be read by vote tabulation scanners. Potential tools to partially automate the transcription of these ballots – including military and overseas ballots – were part of the overall election modernization effort. More importantly, continuous innovation better serves the jurisdiction’s voters while meeting the new requirements of the California’s Voter’s Choice Act of 2016. Orange County was mandated to reach compliance to this act in 2020.

The ROV’s office gradually phased in the Novus software with its first small-scale test usage during the March 2020 primary with its legacy voting system. Use of the Novus software expanded significantly during the November 3, 2020 general election in conjunction with the implementation of their new voting system plus many additional election technologies and processes.

The 2020 general election was an extremely challenging time to implement any new technology, but the Orange County ROV’s office experienced great success. Over 1.54 million ballots were cast by Orange County during the November 3, 2020 election representing an 87.3% turnout, the second highest voter turnout percentage ever experienced in the county. To add even more service to voters due to the COVID-19 pandemic, the California Secretary of State’s office mandated that all registered voters automatically received a vote by mail (VBM) ballot from their county election office. Both in Orange County and throughout the state, this resulted in a significant increase in VBM ballots. Despite the large number of VBM ballots, COVID-19’s significant impact on election administration, and the introduction of a new voting system and additional election technology, Orange County ROV Kelley said 2020 was one of the smoothest elections ever in Orange County’s history.

How did the ballot duplication technology work?

How did the ballot duplication technology fare?

The Orange County ROV’s office conducted time and process studies to compare the new ballot duplication technology solution with traditional manual remaking of ballots. While not dramatically increasing through-put and time savings, time and staff-power was still saved, plus the addition of the ballot duplication technology resulted in a smoother, more efficient, and easier to track / easier to audit process. Improvement in transparency and chain of custody alone makes this solution critical to the Orange County ROV’s post-election processing.

Before the November 2020 election, the Overseas Voting Initiative anticipated an increase in absentee/by-mail ballots throughout the country, and the corresponding necessity for election jurisdictions to examine their ballot tabulation processes. In a series of articles, published between July and September the ballot duplication (or transcription) process in states was assessed.

As members of the Overseas Voting Initiative’s working group reflected on how they handled election observation of the ballot duplication process, several ideas emerged.

Although 2020 was an extraordinary year requiring adaptations and quick thinking, many of the processes that election officials put in place for remote and in-person observation of tabulation processes will likely be useful in the future as well.

With the November 3, 2020 election in the nation’s rearview mirror, it is time to examine some of the challenges that affected military and overseas ballots the Overseas Voting Initiative (OVI) discussed in the lead up to the presidential election.

One such topic is ballot duplication. In the coming weeks, the OVI will examine:

Last summer, the OVI issued a series of articles regarding ballot duplication and providing timely recommendations for election officials to consider in 2020. It was anticipated that the pandemic would result in an increase in the use of absentee, by mail and other ballots cast outside of polling places. This, in turn, would necessitate an increase in duplication.

In fact, the topic of ballot duplication was discussed frequently by election officials and in the media as voting procedures were a focus of post-election analysis.

Election officials across the country, including those in Montgomery County, Maryland, Marin County, California, and San Joaquin County, California, proactively shared information  with their communities and the media on their processes for duplicating damaged or otherwise machine-unreadable ballots prior to November 3, 2020. The Cybersecurity Infrastructure Security Agency (CISA) even highlighted the ballot duplication process preemptively – and cited the OVI’s article series – in its highly-referenced “Rumor Control” website explaining that, “In some circumstances, elections officials are permitted to “duplicate” or otherwise further mark cast ballots to ensure they can be properly counted.”

Despite the diligent work by election officials and others to explain the nature and purpose of ballot duplication, the topic was still a subject of considerable misinformation and disinformation [1] post-election. For example, officials in Delaware County, Pennsylvania were forced to debunk manipulated video of their ballot duplication process and City of Detroit election officials testified about the process to their state senate.

Perhaps most notably, Maricopa County, Arizona authorities worked to explain and combat ballot duplication misinformation and disinformation that quickly spread on social media. This was focused on proper vs. improper methods for marking paper ballots and concerns about whether these ballots would be counted. This became known as “Sharpiegate.” It was featured in CISA’s Rumor Control site, again referencing the OVI series on ballot duplication.

Additionally, there were stories about jurisdictions utilizing the ballot duplication process for ballots affected by the following notable circumstances:

The next article in this series will cover how ballot duplication and other post-election processes were viewed by both in-person and remote election observers while dealing with physical distancing, building capacity restrictions, and other COVID-19 restrictions.

END_OF_DOCUMENT_TOKEN_TO_BE_REPLACED 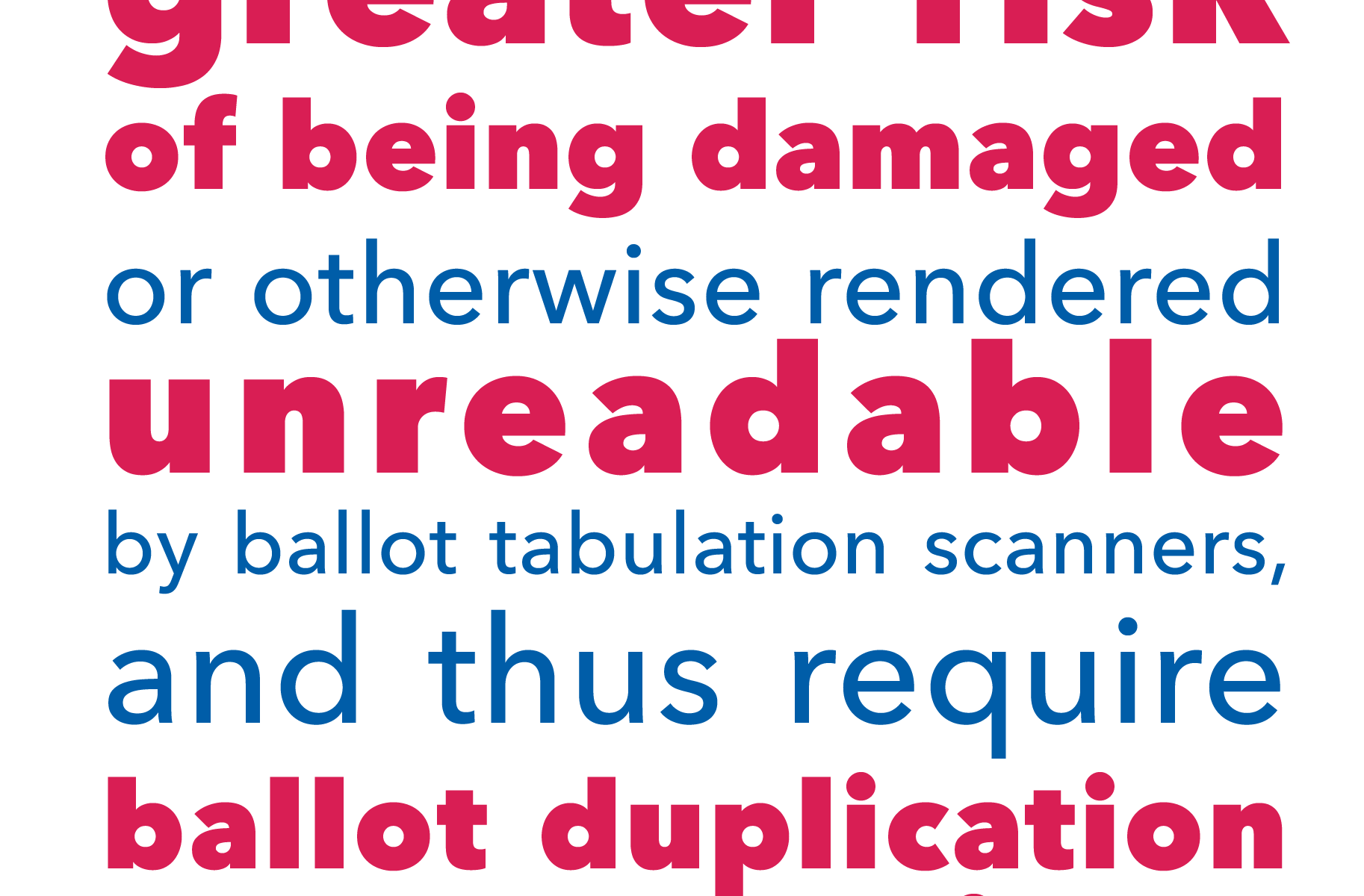 A presidential election draws significantly more voters than a midterm or local election, resulting in more ballots to count. With expanded for vote-by-mail and no-excuse absentee voting, due to the COVID-19 pandemic, a significant increase in the number of ballots marked outside of the tightly controlled environment of a physical polling place.

END_OF_DOCUMENT_TOKEN_TO_BE_REPLACED 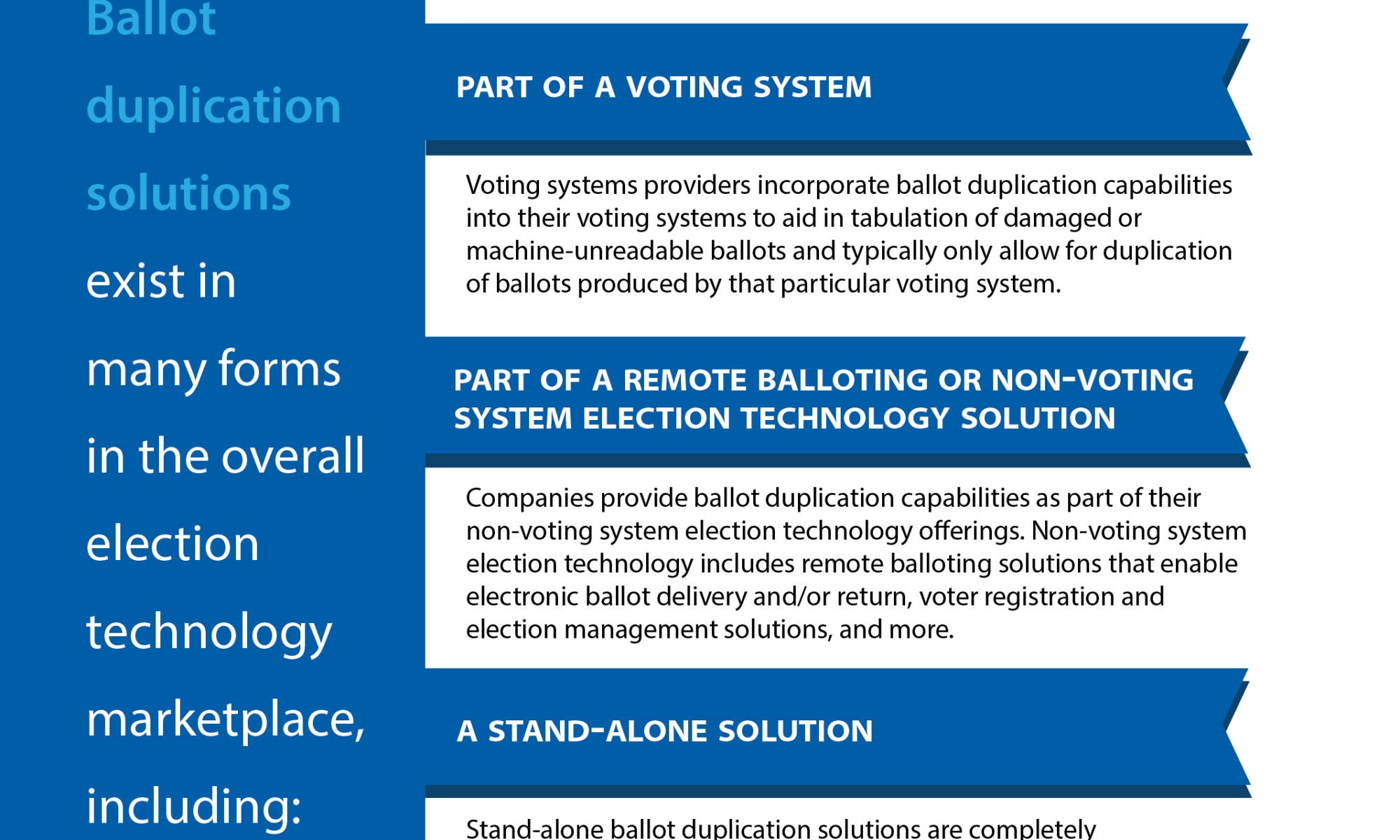 In this post, we’ll provide a general overview of the ballot duplication technology landscape and its innovation since OVI began to research this topic in 2016. We’ll then briefly highlight a local jurisdiction’s first use of ballot duplication technology in 2018 and how this advancement has proven helpful in processing their damaged or otherwise machine-unreadable ballots prior to counting.

END_OF_DOCUMENT_TOKEN_TO_BE_REPLACED 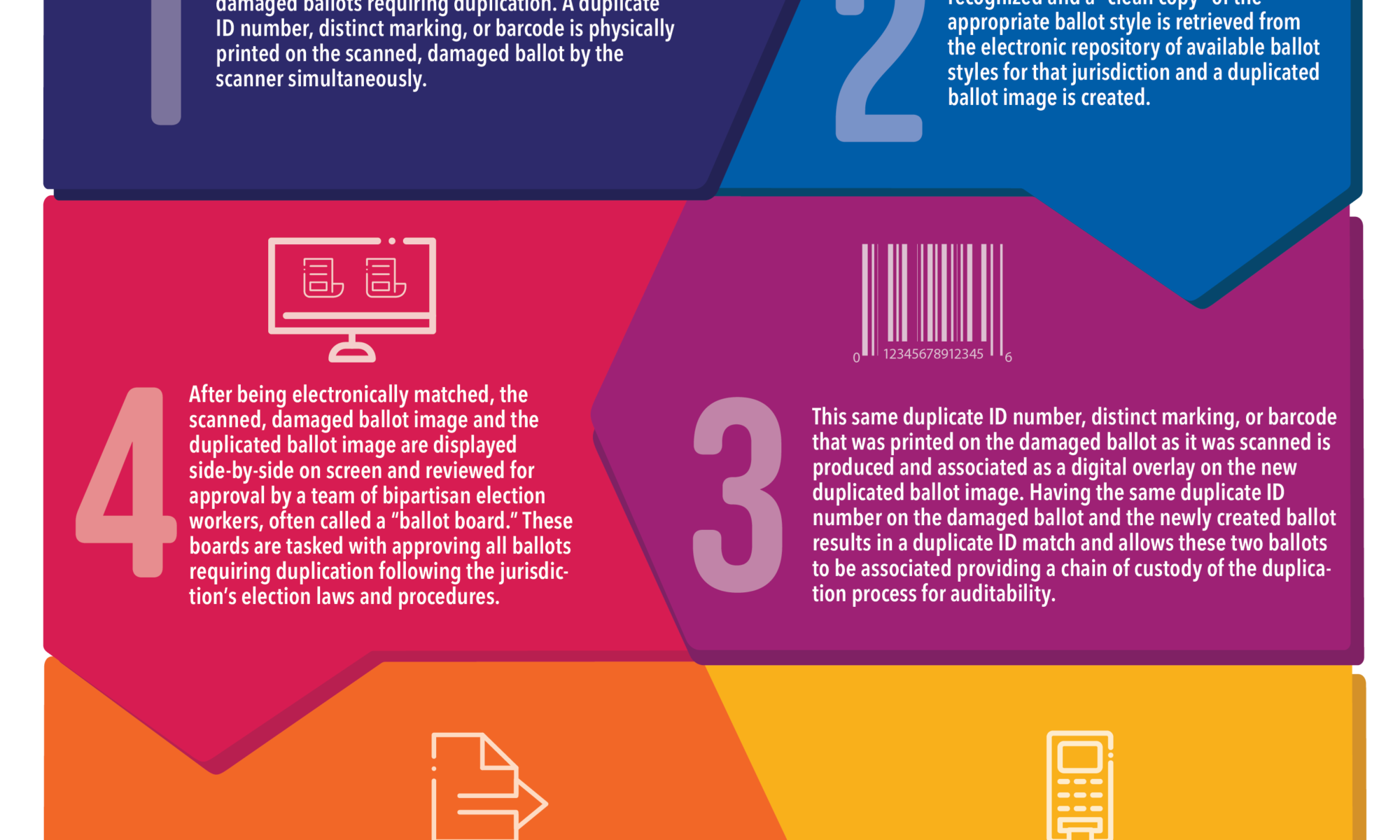 Our first post in this series on ballot duplication served as an explainer to demystify this term, which refers to the process used to transcribe a damaged or unreadable ballot so that it can be counted.

In our second blog post, we shared the Overseas Voting Initiative’s (OVI) latest recommendations for ballot duplication in light of the COVID-19 pandemic.

In this post, we will define ballot duplication technology solutions and give a general overview of how these solutions work.

END_OF_DOCUMENT_TOKEN_TO_BE_REPLACED

Throughout our blog series on ballot duplication, the Overseas Voting Initiative (OVI) has asserted that elections conducted during the coronavirus pandemic will likely yield a higher volume of ballots returned via mail or other methods.

END_OF_DOCUMENT_TOKEN_TO_BE_REPLACED 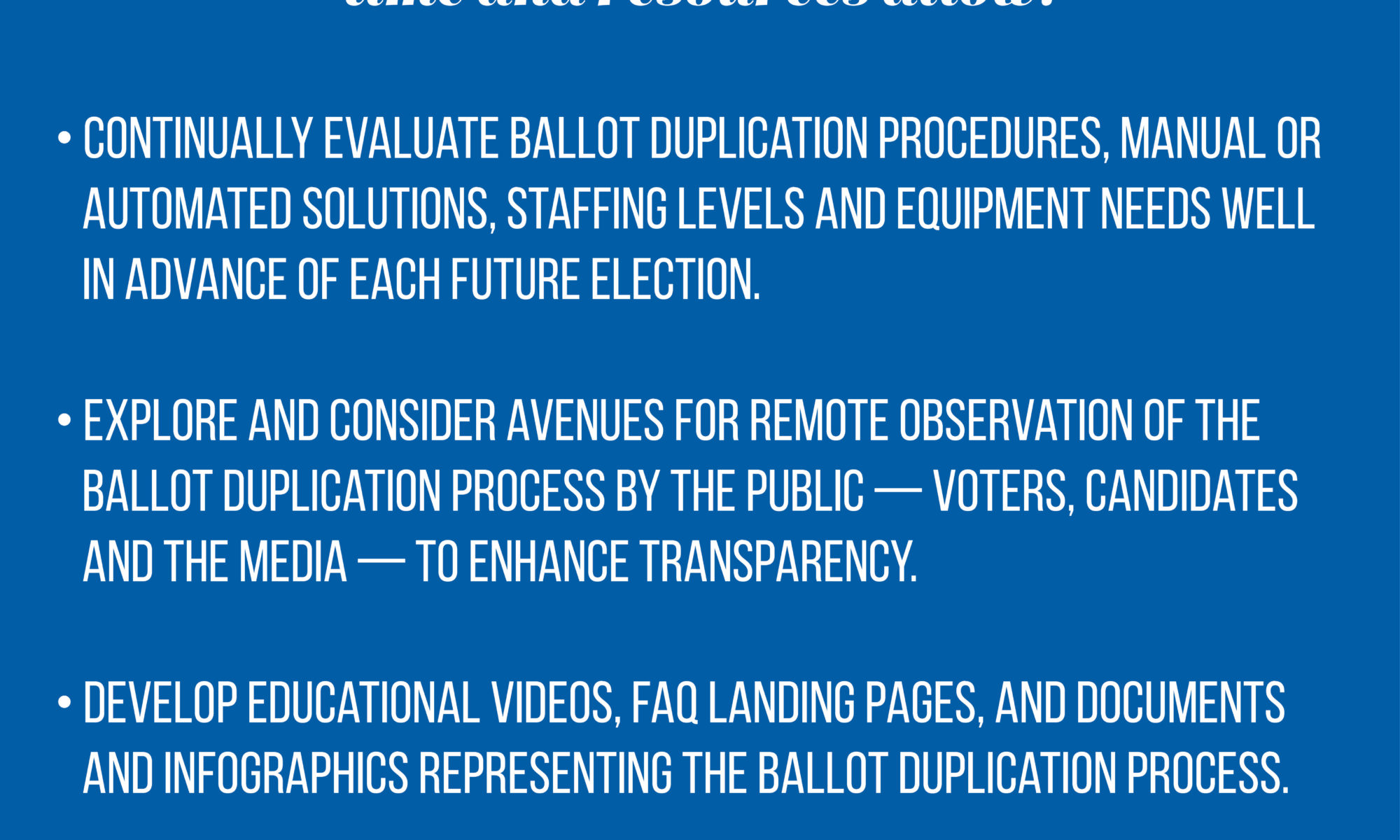 With an eye toward contingency planning for Nov. 3, 2020 and beyond, the Sustainability of UOCAVA Balloting Solutions Subgroup of The Council of State Governments Overseas Voting Initiative (OVI) developed new recommendations for duplication of damaged and/or machine unreadable ballots.